What is School Discrimination?

Almost all schools are prohibited from discriminating against individuals based on these protected classes, with the notable exception of private schools run by religious organizations.

School discrimination is prohibited by New York State and federal law. There are several ways that you can seek a legal remedy under these laws, including:

There are two laws in New York that deal with school discrimination: § 296.4 of the New York State Human Rights Law (HRL) and the Dignity for All Students Act (DASA). Below is an overview of both, and what remedies may be available, if any.

What Does the Law Say?

The HRL prohibits educational institutions from denying the use of its facilities to any person otherwise qualified and allowing discrimination based on protected classes of persons. These classes are:

Educational institutions covered by the HRL include:

Under the HRL, a school cannot refuse to admit or terminate an otherwise qualified student based on that student’s membership in a protected class. Schools must also work to prevent and correct student-on-student bullying and harassment, as well as staff member-on-student harassment. This includes sexual harassment.

What Remedies are Available Under the Human Rights Law?

There are two main options for seeking legal remedy under the HRL, filing a complaint with DHR or filing a lawsuit in state court.

You can access a DHR complaint form HERE. The complaint should include all relevant evidence of the discrimination. In addition, the complaint must be signed. The complaint can be submitted by mail to your nearest DHR office, email, or fax. Please click HERE for more information about DHR’s website.

Once a complaint is filed, DHR investigates to determine if there is probable cause that discrimination occurred. At this time, the respondent (the individual or entity accused of discrimination) can submit a response to the complaint. You (the complainant) can respond to the respondent’s statement as well. Please note that a determination of probable cause does not mean that you have won your case, it just means that it is more likely than not that discrimination has occurred.

If there has been a finding of probable cause, your case will proceed to a public hearing. An attorney from DHR will be assigned to the case if you do not have one. There is no cost for this attorney. You and respondent will first go before an administrative law judge (ALJ) for a prehearing settlement conference, which gives you the opportunity to settle your case before it is scheduled for the hearing.

If no settlement agreement is reached, the public hearing is scheduled within 270 days of the complaint being filed. The hearing is trial-like and evidence will be submitted to the record. The hearing may last more than one day, not necessarily consecutively. After, the ALJ will prepare a proposed Order and the parties will have the opportunity to respond to it.

This proposed Order with the parties’ responses are given to the Commissioner of the DHR for review. After review, the Commissioner will issue a Final Order. This is where it is determined whether discrimination occurred or not. The parties can appeal the Final Order in state court within sixty days.

If the Commissioner finds that discrimination has occurred, there are several remedies available that the Commissioner may order. The respondents will be told to cease and desist all discriminatory practices. Additional remedies may be ordered, such as anti-discrimination training, changed policies, granting reasonable accommodations for disabilities, compensatory damages for pain and suffering, attorney’s fees, or civil fines and penalties.

Instead of filing a complaint with DHR, you may file a lawsuit under the HRL in state court. You must serve a Notice of Claim to a school or school district within 60 days of the discriminatory act. This gives notice to the defendant that they will be sued. You must file the lawsuit within one year of the act of discrimination.

Please note that you should consider hiring an attorney to file a lawsuit in state court.

II. The Dignity for All Students Act

The Dignity for All Students Act (DASA) is another state law that prohibits bullying, harassment, and discrimination. DASA, like the HRL, includes a list of protected classes:

An investigation is then completed by the school or DASA coordinator. At that time, the DASA coordinator will determine whether the complaint is verified as a “material incident” that gets reported to the state Department of Education’s School Safety and Educational Climate (SSEC) data collection form. That information is then available to the public on the New York State Education Department’s website.

I. Filing a Complaint with OCR

OCR is a federal agency that enforces the federal anti-discrimination laws. A complaint can be filed there by contacting New York’s OCR office, filing online, or sending a letter/email to the OCR office. The complaint should include the name of the school or individual accused of discrimination, your contact information, and the timeframe of when discrimination occurred. You must file the complaint within 180 days from the act of discrimination. You can do this free of charge.

OCR will then acknowledge the complaint has been filed and decide whether it has jurisdiction over the parties and subject of the complaint. OCR will then investigate the matter. While OCR investigates, the recipient (the individual or entity who has been accused of discrimination) can enter into a voluntary resolution agreement with OCR. When OCR has finished with its investigation, it will determine whether there was sufficient evidence to say that the recipient violated the law.

In addition to the complaint process above, OCR also offers mediation to resolve disputes. This is optional and both parties would need to agree to it. However, OCR will not monitor the terms of any agreement made between the parties and the mediator lacks the authority to impose a settlement.

CLICK HERE for the Know Your Rights Guide PDF 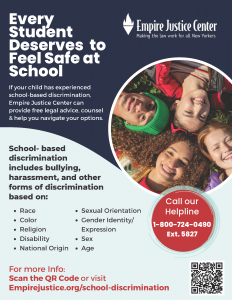