Louise Tarantino’s name is practically synonymous with New York’s Disability Advocacy Program (DAP).  She was hired as a DAP State – Wide Coordinator at the Empire Justice Center (then the Greater Upstate Law Project) back in 1987, and has worked to insure the success of the program ever since.  But all good things must come to an end – and Louise has announced that time has come.  She will retire at the end of July.

When Louise started with DAP, Ed Lopez was the State-Wide Coordinator.  As Ed says, “Louise is a wonderful, caring human being; she will be missed by the DAP community.”    Peter Racette of the Legal Aid Society of Northeastern New York (LASNNY) shared similar sentiments.  Louise came to DAP the same time Peter started at North Country Legal Services.  He has treasured Louise as a colleague and a sounding board.  To Peter, Louise is in many ways the embodiment of the DAP program.  She took responsibility for every aspect: training, consulting, handling federal court appeals, organizing task force meetings, dealing with reports, and advocating with our funder.  She promoted the great sense of camaraderie that makes DAP so special.  According to Peter, Louise is one of the prime reasons DAP has remained so well-organized and so cohesive.

Long-time DAP advocate and NYC Coordinator Ann Biddle has admired Louise’s unfailing professional courtesy and poise in the courtroom, particularly in the august Court of Appeals for Second Circuit. Ann has also     appreciated – as have so many others – Louise’s personal support and friendship.  And Ann has particularly       enjoyed spending time with Louise in NYC or at conferences, exploring new places, trying new restaurants, and sharing Prosecco.

Giovanna Ferdenzi of Nassau-Suffolk Law Services adds that when she met Louise 18 years ago, she was quickly impressed by Louise’s knowledge and professionalism.  But Gio was most impressed by how Louise treated her.  Louise acted as if they had known each other years, although Gio admits that bonding over Italy and Italian food will do that.  She also fondly remembers serving as a GPS for Louise and Kate before the days of GPS.  She was glad to be able to provide guidance to someone who has provided so much knowledge and guidance to so many.

Louise has served a mentor to newer DAP advocates as well.  Mike Telfer, a DAP attorney at LASNNY, is grateful for Louise’s mentorship over the years.  She has encouraged him to train at the Partnership Conference and at DAP Task Force meetings.  She has been a valuable resource for the DAP unit at LASNNY over the years, whether as     co-counsel or offering invaluable advice.

Louise has also been an invaluable colleague outside the DAP community, as reflected in Kirsten Keefe’s poetic tribute re-printed at the end of this newsletter. And Louise’s influence has reached beyond the legal services world.  Louise has wowed audiences at innumerable NOSSCR’s conferences with her knowledge and straightforward manner.  Attorney Steve Modica of Rochester noted Louise’s many years of distinguished service in a critically important area of the law.  According to Steve, she has made a difference in the lives of many, including private sector lawyers like him.  Attorney Kristen King of Albany considered Louise a mentor for many years, serving as a moral sounding board when Kristen confronted ethical quandaries in her practice.  Kristen also turned to Louise when she had questions regarding the minutia of social security regulations.

And of course the very flappable other half of the Louise and Kate show will be lost, both literally and figuratively, without the unflappable Louise.

Louise has indeed left an indelible mark on DAP.  We are grateful for all she has done over the past thirty plus years to help continue and increase funding, to streamline reporting requirements, and generally to smooth over all bureaucratic concerns.

We appreciate all Louise has done to raise the level of competence and professionalism of the advocates around the state and beyond, and to help shape the law in this ever changing area of practice.  And she has done it with grace and good cheer.  We all join in wishing Louise a long, happy, and healthy retirement as she moves to the next chapter of her life. 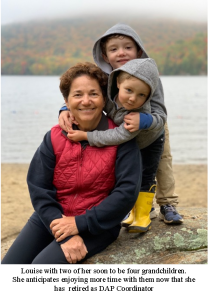