What We Do
×
test

At an annual cost of $15,394, quality child care is unaffordable for 90% of New York families. New York State ranks 6th out of all 50 states for the most expensive infant care. In fact, a minimum wage worker would have to work for 35 weeks just to pay for one infant’s child care! Yet subsidized child care is underfunded and increasingly unavailable.

Shouldering the Strain: How Counties Cope with Inadequate Child Care* breaks down the top methods that counties across New York State employ to deal with this chronic and worsening underfunding. Based on data collected by Empire Justice from July to August of this year, this report includes up-to-date information on the methods counties use to try and stretch child care funds, from lowering eligibility levels or closing intake to denying subsidies to parents and caretakers with disabilities.

Shouldering the Strain also includes information on current initiatives that are helping to increase access to child care, as well as recommendations on what New York State must do next: assess the unmet need; create consistent eligibility requirements, assure that copays are affordable, and expand funding for facilitated enrollment and all child care. 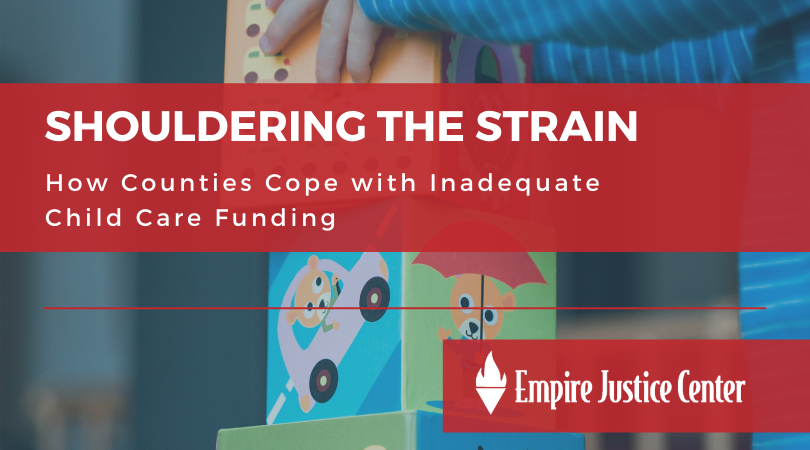 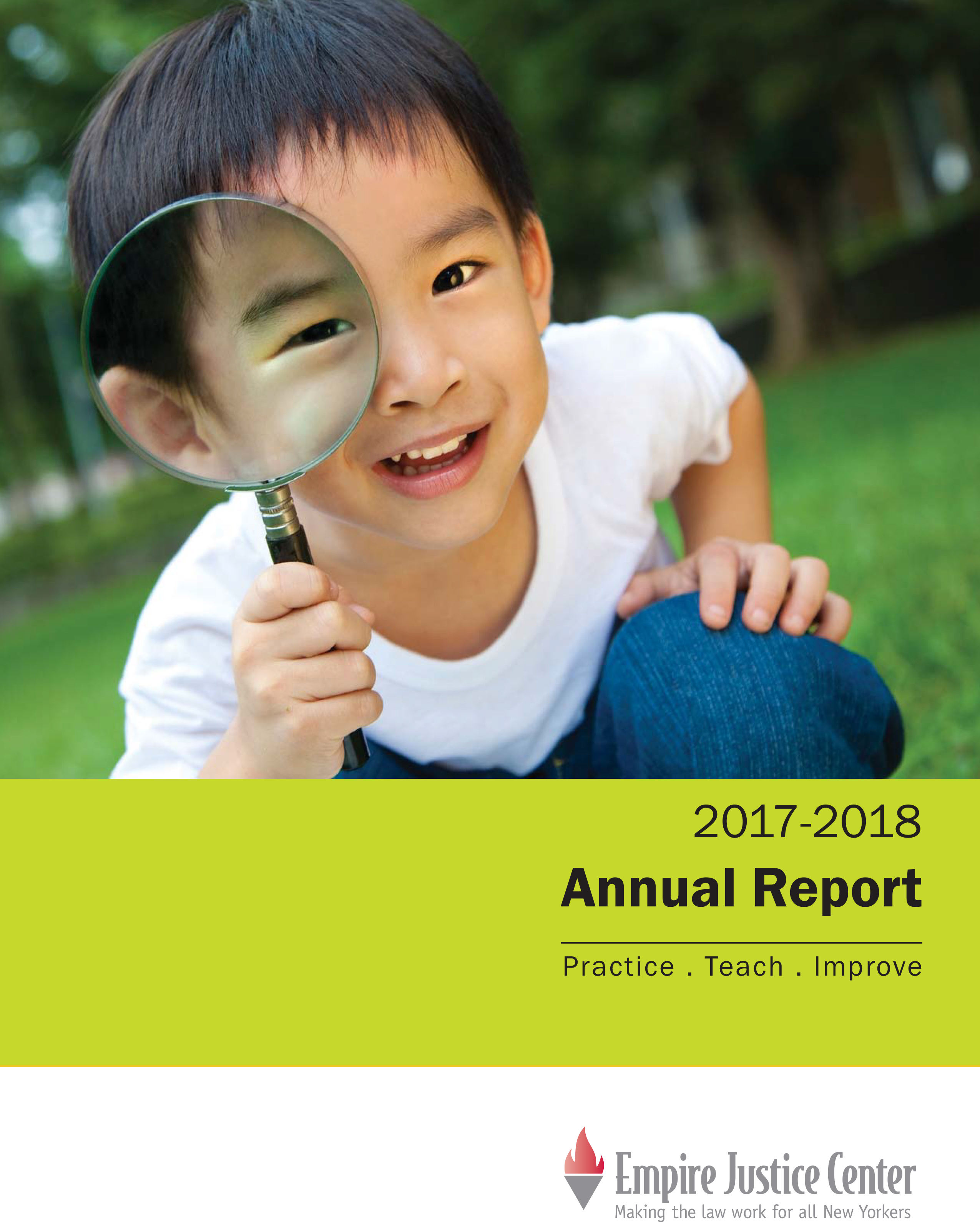 REPORT: Too Big to Fail… Too Poor to Bank: How Mainstream Financial Services Can Help Low-Income Working Families Succeed

We are proud to announce the release of our latest data-rich report, “#AllTogetherNow: Improving Small Business Lending in the Rochester NY Community,” which looks at aggregate small business lending in 2015 and compares it to the distribution of occupied businesses for the city of Rochester, Monroe County and the rest of the Rochester metro area

As Research/Policy Analyst and principal author of the report Barbara Van Kerkhove, PhD. said “our community needs to work together to improve access to credit for businesses located in the city of Rochester. As our report shows, the city has 7,245 occupied businesses or 28% of the businesses in the Rochester area. However, city businesses received only 17% of the area’s loans in 2015, and only 20% of the total dollar volume of lending. The discrepancies were clearest in areas with low to moderate income census tracts and with significant communities of color.

Some key findings include:

“Divergent Paths: The need for more uniform standards and practices in New York State’s residential foreclosure conference process” reveals wide variations in the implementation of foreclosure settlement conference rules.  The wide variations in implementation have the potential to leave tens of thousands of New Yorkers at heightened risk of losing their homes.  This report analyzes the practices and procedures of New York State’s pioneering court-mediated settlement conference program – a program designed to help New Yorkers save their homes from foreclosure – and reveals that a lack of strong statewide guidance has resulted in procedures that vary significantly based on where homeowners live.

Some of the key recommendations from the report include:

Turn up the Heat: It’s Time to Raise New York’s Shelter and Fuel Allowances illustrates how the public assistance shelter and fuel allowances are so far out of step with the actual costs of housing and heating, they are pushing many financially fragile New Yorkers out of homes and into homelessness.

Consider this: According to HUD, New York had the biggest increase in homelessness of any state between 2013 and 2014, and the NYS Education Department reports that the number of homeless children between 2009 and 2014 increased by more than a third.

Consider this: New York’s fuel allowance has not been increased in 28 years.  And in Albany County, the shelter allowance for a one bedroom apartment is $309, less than 40% of the HUD Fair Market Rent for the Region.

The numbers simply don’t add up to allow for safe, stable, warm housing – essentials of life for everyone, but particularly for children. New York has a golden opportunity to help stabilize families in their homes by making modest increases in the shelter and heating allowances. These investments will help avoid the much costlier expense of emergency shelter stays and the negative impact on children’s well-being and educational attainment that is a proven result of homelessness.

Check out the fact sheet

The Lingering Storm: Mortgage Lending Disparities on Long Island examines mortgage lending, denial rates and denial disparities in 2013 to evaluate the recovery of Long Island communities in terms of access to mortgage credit and the greater American Dream. In an effort to combat our nation’s discriminatory housing policies, we offer several recommendations for policy makers at all levels of government.

Empire Justice Center’s newest report, “The Lingering Storm: Mortgage Lending Disparities on Long Island,” is a snapshot of mortgage lending in 2013, exploring the recovery of Long Island communities and their access to mortgage credit and, by extension, access to the American Dream of homeownership.

Some of the report’s specific recommendations include:

Read our local, state, and federal recommendations based on the analysis in the report 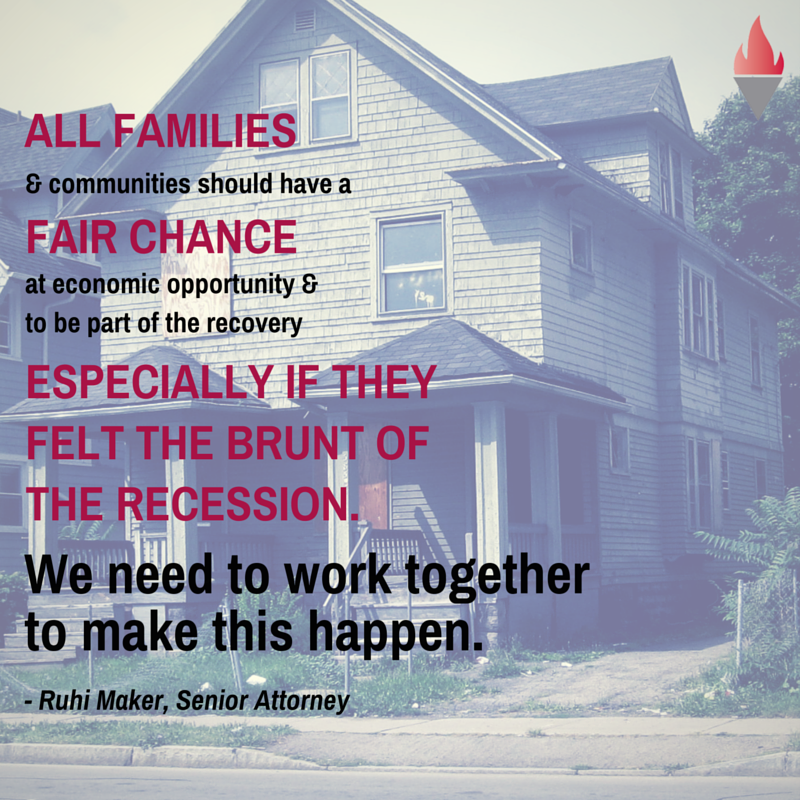 New York’s Exchange Portal: A Gateway to Coverage for Immigrants

Health Insurance Exchanges have the potential to eliminate many existing barriers to health insurance coverage for low-income workers facing reductions in salaries and benefits.  Immigrant families, whose incomes tend to be lower to begin with, have been particularly hard hit by escalating health care costs. National figures from 2010 indicate that 75% of workers in noncitizen families were in traditional blue collar jobs, as compared to 60% of workers from citizen families. The average median annual income for noncitizens was $25,000, roughly half the amount for citizen households. In New York, home to 4.3 million immigrants, noncitizens are over three times as likely as citizens to lack health insurance.

This newest update clarifies that noncitizens are considered PRUCOL for Medicaid purposes if they have evidence that the immigration services have affirmatively decided not to pursue their  deportation, for example, if they present a court order showing that removal proceedings against them have been terminated. 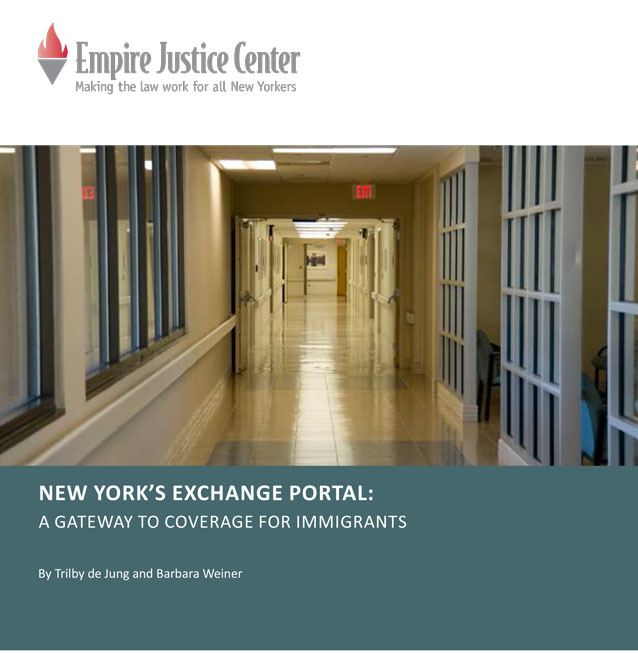 Language access makes it possible for limited English proficient (LEP) individuals to access a wide range of services.  As defined by the U.S. Department of Justice, LEP individuals are persons who do not speak English as their primary language, and who may have a limited ability to read, write, speak, or understand English.  According to the most recent U.S. Census, Nassau County has 130,000 individuals who consider themselves to be LEP.

It’s been two years since Nassau County Executive Ed Mangano signed Executive Orders 67 & 72, promising interpretation and translation at Nassau County Agencies, yet little progress has been made.  Many programs were already required to provide language access under federal law and have failed to meet their legal responsibilities.

This report from Long Island Language Advocates Coalition (LILAC) describes the importance of, and need for, comprehensive language access in Nassau County based on the demographics as well as moral imperative, the legal precedents and requirements which extend all the way to the federal level, and the history of advocacy efforts in Nassau County before and after the signing of Executive Orders 67 and 72.  Also included are the results of testing efforts conducted by members of numerous community based organizations well after the language access orders should have been fully implemented.

Link to brief one pager