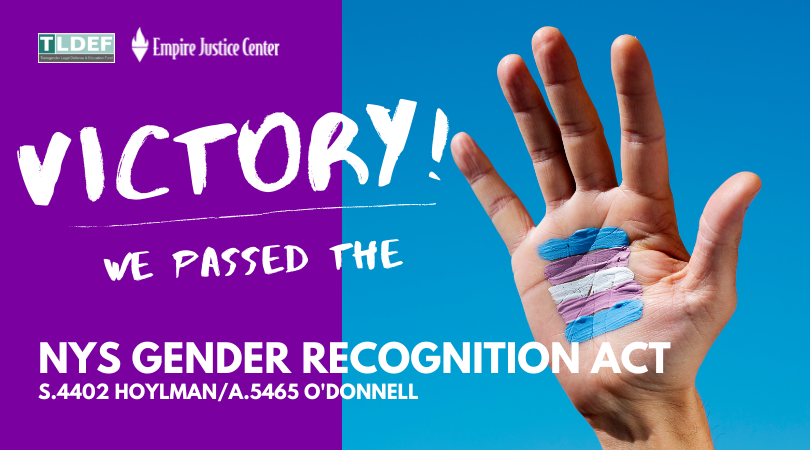 “After years of advocating for these necessary changes, we are elated to see the Gender Recognition Act finally going to the Governor’s desk for signature.”

Albany, NY – Today, the Transgender Legal Defense & Education Fund (TLDEF) and the Empire Justice Center celebrated the passage of the NYS Gender Recognition Act (S.4402/A.5465) by the New York State legislature. The Gender Recognition Act is a comprehensive bill that will create streamlined and privacy-protective processes for transgender and nonbinary New Yorkers to update and obtain accurate identification documents.

“After years of advocating for these necessary changes, we are elated to see the NYS Gender Recognition Act finally going to the Governor’s desk for signature. Among many important changes, this bill makes updating ID documents easier and less expensive by removing both the requirement for a doctor’s note to change gender markers and the publishing requirement for court-ordered name changes” said Charlie Arrowood (they/them), TLDEF’s Name Change Project Counsel. “Having accurate ID documents that reflect who you are is critical for the health and safety of transgender and nonbinary New Yorkers.”

As organizations providing direct legal services to transgender and nonbinary New Yorkers, TLDEF and the Empire Justice Center worked with a robust coalition of more than twenty different transgender, LGBTQ, civil legal, and civil rights advocacy organizations to identify the myriad problems transgender and nonbinary people face when seeking to update identity documents. They worked together with legislators to propose solutions, which are now being adopted in the NYS Gender Recognition Act.

“This bill is not just about securing documents that reflect our identities as transgender, nonbinary, or intersex people, it’s about securing our safety, our housing, our education, our health – in all the situations and places where that little ID card or scrap of paper is between us and what we need to survive and thrive,” said Eòghann Renfroe (he/him), Empire Justice Center’s Policy & Communications Manager. “We are grateful to Senator Hoylman and Assemblymember O’Donnell for their leadership as sponsors of the NYS Gender Recognition Act, as well as Assemblymembers Jessica González-Rojas and Harry Bronson for their support, and former Assemblymember Ortiz for his prior championship of the bill. This legislation can serve as a model for other states looking to protect and support their transgender and nonbinary communities.”

“Each and every New Yorker should be recognized for who they are by their government. But today, it remains incredibly hard for many New Yorkers to get the identification documents they require for travel, to get a job, and even to go to school. This bill will change that, making it easier for gender non-conforming, transgender, nonbinary, and intersex New Yorkers – including minors – to get IDs that accurately reflect their identity,” said Senator Brad Hoylman (he/him). “I am thankful for the advocates in those communities for their input on this critical bill. And I’m proud to live in and represent a state that respects and values the needs of these communities – particularly as queer, and especially transgender people, have come under attack in recent months across our country.”

“Today is a proud day for New York State, as we secure our standing as a leader in LGBTQ rights and ensure that transgender, nonbinary, and intersex New Yorkers have the equality and dignity they deserve,” said Assemblymember Danny O’Donnell (he/him). “The NYS Gender Recognition Act is historic legislation that allows New Yorkers to have their true selves reflected on the government documents they use every day. No one should face overwhelming financial, medical, and bureaucratic barriers simply to have their existence officially recognized. These obstacles only serve to make people’s lives harder and more dangerous, particularly for trans New Yorkers of color who too often have limited resources, face disproportionate rates of violence, and are already marginalized by our legal system. I am deeply honored to carry this important bill to make life safer for trans individuals, reduce stigma, and affirm trans individuals’ identities. I thank Senator Hoylman, former Assemblymember Ortiz, and especially the trans, nonbinary, and intersex advocates who have worked tirelessly to shape and support this legislation.”

For transgender, nonbinary, and intersex New Yorkers, there have been a multitude of financial, logistical, and safety-related barriers to updating documents with the correct name and gender. According to the U.S. Transgender Survey, 88% of trans New Yorkers have not been able to update all of their identity documents, and 63% have not been able to update any of these documents. Mismatching ID documents leave transgender and nonbinary New Yorkers open to discrimination in employment, housing, education, travel, and health care.

The NYS Gender Recognition Act removes many of the barriers that transgender, nonbinary, and intersex New Yorkers have experienced in obtaining and updating accurate birth certificates, marriage certificates, driver’s licenses, and court-ordered name changes. It does this through the statutory creation of an X gender marker option for New York State-issued birth certificates and driver’s licenses, the implementation of a self-attestation standard for recognizing gender identity, removal of the requirement to publish in a newspaper for a court-ordered name change, addition of a requirement for justification for judicial notifications, and a host of other improvements. For more on what the bill will do, see the Joint Memo of Support for the NYS Gender Recognition Act, signed by the Gender Recognition Act Coalition, a group of more than 20 organizations led by TLDEF and the Empire Justice Center.

About TLDEF and Empire Justice Center:

TLDEF is committed to ending discrimination based upon gender identity and expression and to achieving equality for transgender people through public education, test-case litigation, direct legal services, and public policy efforts. To learn more about TLDEF’s work, visit tldef.org.