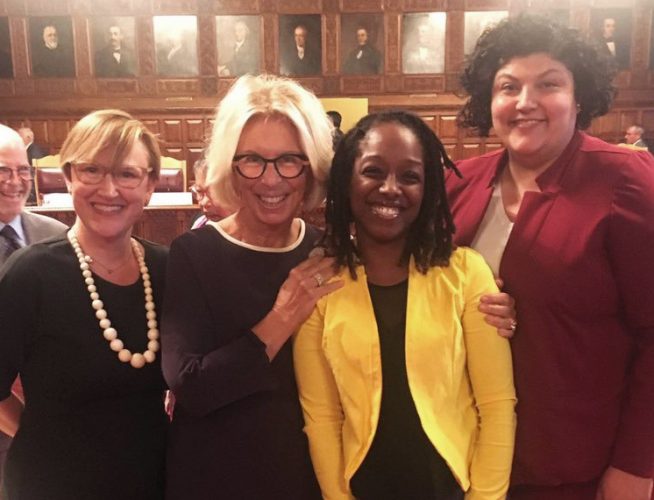 Welcome to Policy Matters – Empire Justice Center’s newsletter to catch you up on all of our policy advocacy efforts to make the law work for all New Yorkers! [read PDF here.]

Just in time for Halloween! In this October 2019 edition of Policy Matters we’ll be covering a victory for parents who work the night shift; the story of a client’s battle for kincare benefits and how it relates to the access to justice gap; an article about one of our Disability Advocacy Program attorneys; opposition to a dangerous federal proposal to cut SNAP benefits; information on Public Charge for Spanish speakers; and several instances of community recognition and collaboration. We’re also asking readers to GET INVOLVED and help make sure three important bills are signed by the Governor!

Parents who work the night shift face a dilemma – they need to sleep during the day, but in many parts of the state have not had access to the same day-time child care that other parents are able to access so they can get the rest they need. A new law will change that: one of our legislative victories this year, Child Care Subsidies for Parents who Work the Night Shift (A.0413A/S.3420), was signed into law by Governor Cuomo on October 4.

This is an issue that Empire Justice highlighted in our 2014 report, Still Mending the Patchwork: A Report Examining County-by-County Inequities in Child Care Subsidy Administration in New York State. The victory is bittersweet, however, as it underscores the need for greater funding for child care. Because the need for child care services already greatly exceeds the available funding, parents who work the night shift will basically have to, “get in line with everybody else,” as Senior Attorney and child care expert Susan Antos stated to the Albany Times Union.

Bridging the access to justice gap is essential to ensuring that everyone in New York has meaningful access to legal assistance when they need it. That is why Empire Justice was proud to testify at the Chief Judge’s 2019 Hearing on Civil Legal Services on September 23.

Former Empire Justice client, Shanell Yarde, was joined by CEO Kristin Brown and Senior Attorney Saima Akhtar at the hearing and spoke about her experience trying to get the cash assistance she needed as a kinship foster care provider for her niece. After a year of effort culminating in a hearing before an Administrative Law Judge, Shanell was in debt, borrowing money from family in order to be able to buy the diapers, clothes, and food her niece needed while also caring for her own three children as a single mother.

“I felt okay about the hearing when it was done,” Shanell testified, “but I ended up losing the hearing and felt like giving up. I had a lot going on in my life and I had no idea what to do next. It was just a really bad time in my life where I needed help.” She reached out to the Legal Aid Society of Northeastern New York (LASNNY), which made a referral to Empire Justice. Our Benefits attorneys teamed up with LASNNY and Shanell to appeal her decision.

“With the help of my lawyers, I felt heard and I felt understood. It was a real turning point for me. We got a decision quickly and we won. The Judge awarded all the money that DSS owed me, but the DSS appealed. Empire Justice was ready to take the appeal with me, too, but the county eventually withdrew its appeal and agreed to issue the assistance payment to me,” Shanell testified. “I remember exactly where I was when Saima from Empire Justice called me to say the county would withdraw the appeal and we could get the payment, and what a relief it was to get the money for my niece.”

This article on Disability Advocacy Program (DAP) Attorney Keana Williams from the Daily Record gives folks a look on the quest for access to justice from the attorney side. As a DAP attorney, Keana works on Social Security Disability (SSD) and Supplementary Security Income (SSI) cases, working with disabled people who have been denied these benefits and helping them through the lengthy appeals process.

Keana describes the difficulties of obtaining complex medical record histories for clients, keeping track of clients who are usually struggling to find a stable place to live, moving often or becoming homeless as they wait through the long appeals process, and trying to help support clients who are in need of mental health treatment. “It’s just so rewarding to see these people who have been struggling for six years and now they get their benefits that are rightfully theirs,” Keana says. “And it changes their lives.”

The Supplemental Nutrition Assistance Program (SNAP) is often the first line of defense against hunger in New York, which is why Empire Justice submitted comments in vehement opposition to proposed changes to SNAP eligibility which would end benefits for hundreds of thousands of food insecure New Yorkers. These changes would:

In short, these proposed changes would send New York, and the nation, backwards in the fight against hunger.

The disastrous Public Charge proposal from the Federal government has been put on hold, for now, but many questions remain for immigrant New Yorkers. Senior Paralegal Cheryl Keshner took part in a Spanish-language group panel on Public Charge organized by Latinx news and communication outlet Noticia Long Island on October 17, along with advocates from Sepa Mujer, Long Island Center for Independent Living, and Community Legal Advocates.

There’s Still Time to Get Involved to Protect the Rights of Marginalized New Yorkers!

Two critical public assistance bills will greatly increase the fairness and effectiveness of public assistance rules. The Sanctions and Conciliation bill protects against inappropriate work rule sanctions by the Department of Social Services (DSS). The Treating Physician bill would ensure that if the medical diagnosis of an agency evaluator differs from that of an individual’s own doctor, the opinion of the individual’s treating physician will be the deciding factor – thus protecting disabled New Yorkers from arbitrary employability decisions.

Securing Wages Earned Against Theft (SWEAT) closes loopholes in existing law to help prevent wage theft and ensure that workers who have suffered from stolen wages have a chance to recover the money they are owed.

With your help we can make these bills become law!

Health attorneys Amanda Gallipeau and Alexia Mickels both attended the East House NY Hope & Recovery Luncheon on Sep. 26. This is an annual fundraiser to increases awareness and understanding of mental illness and addiction, and to celebrate those in recovery.

In recognition of her legal service and partnership work on consumer issues, Senior Attorney Kirsten Keefe was presented with the Community Partnership Award at HomeSmart NY’s 2019 Annual Statewide Conference and Awards Dinner on September 25!

And finally, Empire Justice Center was honored to receive a cy pres award of $4,305 from a settlement in Miranda v. Cach LLC et al. Thank you to Dan Schlanger, of Schlanger Law Group LLP, and Syracuse-based attorney, Anthony J. Pietrafesa, for their recognition of our contributions to consumer law!

Cy pres is a legal doctrine that first arose in the courts of equity and is commonly seen in class actions today. Cy pres awards are funds from a settlement that go unused by the class, for example when not all class members can be found or respond to the class action settlement notice, to receive compensation.  Non-profits working on issues involved in the lawsuit – consumer law in this case – are typically designated by class counsel and approved by the court to receive cy pres awards.

A note for our regular readers – we’ll be taking November off so we can focus on developing our 2020 Legislative Agenda, but we’re planning to have one last 2019 edition come out in December. Keep an eye out!