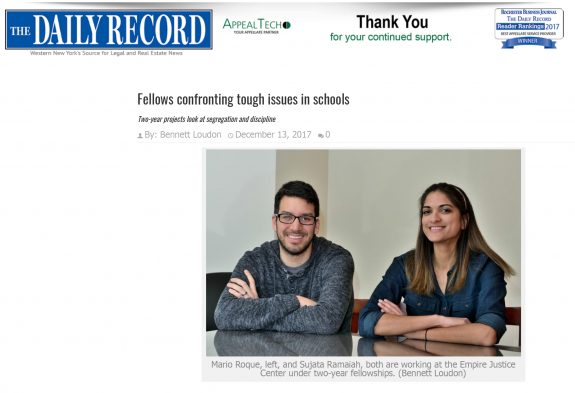 Sujata Ramaiah, who graduated in August from the University of Denver Sturm College of Law, began work in
September as the Hanna S. Cohn Equal Justice Fellow.

Ramaiah is scheduled to take the bar exam in February. Roque has passed the bar exam, but has not yet been
formally admitted to practice. They both have practice orders from the Appellate Division of state Supreme Court,
Fourth Department.

De Facto segregation
A native of Corning, Ramaiah received a bachelor’s degree in international relations from Syracuse University in
2009.

Before attending law school she worked as an AmeriCorps paralegal in the Ithaca office of Legal Assistance of
Western New York and volunteered for the Legal Aid Foundation of Santa Barbara County in California.
She was a legal intern for the Federal Mine Safety and Health Review Commission, the National Association of
Counsel for Children, the Steuben County Public Defender’s Office, and the Bath office of LawNY.
Ramaiah’s interest in working on youth advocacy issues started during her undergraduate education when she
worked with at-risk high school students in an after-school program at a community center in Syracuse.
“That was my first exposure to how education systems can fail students,” she said.

“I had a lot of students that were in high school and struggled to read at that level. That has been an experience
that I’ve seen across the country in different settings,” said Ramaiah.

Before law school she worked in a similar program in Lompoc, Calif.

“If the school is not welcoming to the student, the student is not likely to succeed within that school system,”
Ramaiah said.

Her work involves advocating for students at suspension hearings.

“I think that it helps the parents to have someone there with them because every guardian that I’ve spoken with
has just been in over their head,” Ramaiah said.

Ramaiah has been appointed to the city school district’s school climate advisory committee.

“I will be working with a group of community stakeholders in that position to make recommendations to the board
of education on ways that they can improve the school climate,” she said.

Roque’s work will focus on the extreme segregation in the Rochester City School District. Students of color make up
about 90 percent of the district’s enrollment.

“Although we lost before New York’s highest court, it sparked an important community conversation, which has
intensified over recent years. Since then, concentrated poverty has worsened in the Rochester city schools, causing
academic performance to greatly suffer,” he said.

Roque plans to tackle the problem from multiple directions: community organizing with parents from city and
suburban districts and with local groups already working to reform Rochester’s education system; negotiating with
school superintendents to build institutional support for systems exchanging city kids with those from the suburbs;
and finally, if necessary, filing a lawsuit to impose exchange programs or redraw school district boundaries.
Roque, who earned his undergraduate degree at the University of San Francisco, came to the United States from El
Salvador when he was 6 with his mother and two siblings.

He was inspired to become a lawyer after working in a drug rehab clinic serving mainly the Spanish-speaking
population because of funding cuts that gradually diminished the services to a trace of the original program.
Roque said he felt powerless in his administrative role to respond to the situation and decided to become a lawyer
because it would enable him to make a change.

Roque was able to get a head start on his project last summer when he worked as an intern at the Empire Justice
Center mostly in employment cases.

He began meeting with community members to talk about the segregation issue and other topics on their mind.
“It’s about community building and seeing what problems the community is facing,” he said.

“The whole time, I was just getting to know the landscape and seeing what the legal options were and meeting with
the community organizers,” said Roque.

“I didn’t want to come in and say, ‘This is what’s best for you.’ I ask, ‘What are you already doing, where are you
seeing results and what issues are you having and how can we help you out?’ ”

His plan is to expand the conversation and get more community input from organizations and parents, which has
been difficult.

“I think there is a lot of fatigue because there have been so many initiatives and they see the administrations
coming and going, different things coming and going and there’s no consistency there,” he said.

Also, because parents have students in schools for a limited amount of time, it’s difficult to keep people engaged.

But Roque said he’s sticking with it.

“My wife and I are here for the long haul. We love the community here. We love living here. And when you live in a
community it’s about making changes for the better, hopefully,” he said.